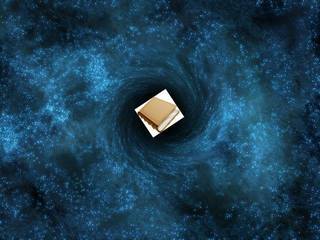 A Black Hole, as it appears to the biographer. (If this doesn't look alarming enough to you, click to enlarge. Image: Zeitnews.org. Book: courtesy of Neil Baldwin.)

Last month, I heard a subject discussed that should interest anyone who has ever discovered that a chunk of the story is missing—meaning, of course, every biographer. Here's my report on what was said from a recent issue of The Biographer's Craft, updated and slightly revised.

Sooner or later, all serious biographers find themselves confronted with a "black hole" in the information about their subject's life. At the 2013 conference of Biographers International, biographer Anne C. Heller pinpointed three manifestations of this dreaded phenomenon: (1) an area in the subject’s life about which no information exists; (2) one about which the biographer cannot get—or is denied—access to information needed to fill the gap; (3) a discrepancy or contradiction (a “myth”) in a publicly accepted story.

Heller asked her colleagues Neil Baldwin, Deirdre Bair, and Carol Sklenicka to talk about black holes they've encountered and how they dealt with them.

(Back to top)
Baldwin said that although he couldn't plan for black holes, he found that standing back and looking at one from the point of view of its entire context could result in a satisfactory workaround, a process he described as "contextualizing." (For an example he gave, click here.)

Sometimes sheer persistence turns up the vital information the biographer is looking for, though filling the hole can come at a price. Deirdre Bair was almost finished with her first biography, Samuel Beckett: A Life, when she obtained access to a collection that included letters Beckett wrote just before leaving Ireland for Paris at the age of thirty-six.

Beckett himself always recalled that he made the move with his mother’s blessing; nevertheless, Bair felt that the memory “didn’t ring true.” When she found a letter Beckett had written at the time to a trusted friend saying, “If I don’t get out of Ireland soon, I’m going to have a nervous breakdown or I’m going to kill my mother,” she decided that she couldn’t let a false memory about something so important stand. Then she spent a year rewriting the entire book.

(Back to top)
What to do when family members or friends refuse to talk freely? In such situations, Bair and Sklenicka both advise the biographer not to lose heart: if someone is willing to see you but isn't forthcoming, Sklenicka suggested, “try asking about what you do know" and then “see if they contradict you or not.” And Bair said: “If people won’t talk to you, keep after them. As time goes by and the book is near completion, they’ll see that the train is leaving the station, and nine times out of ten they’ll want to jump on.”

Of course, sometimes a crucial gap can’t be filled, circumvented, or finessed—for instance, when a subject has burned all the correspondence. In such a case, Baldwin suggested, the writer should simply “be up front with the reader,” explaining the obstacle in an introduction or preface.

On the other hand, if the lacuna isn't especially momentous, Sklenicka said, sometimes it's better to stop trying and be philosophical. "At some point you have to distinguish what is important and what is not. You’ll never know everything.”

(Adapted from the June, 2013 issue of The Biographer's Craft by permission of the editor.)

(Back to top)
After this report appeared, I got an email from Nancy Greenspan, whose subject is the German theoretical physicist Klaus Fuchs. Fuchs was the spy who was convicted after World War II for passing atomic secrets to the Soviet Union.

Nancy asked if I could expand on what Neil Baldwin said about contextualizing so that she could "operationalize" it (cool term; wish I were writing about a spy), at which point I realized that I hadn't written down his example. So I asked him to repeat it for me, which he has kindly done:

"When I was researching Henry Ford and the Jews: The Mass Production of Hate, which is a study of Ford's antisemitism, I was disappointed to find that nearly all contemporaneous information from the Dearborn Independent newspaper documenting Ford's editorial role had been removed from the archives and/or destroyed.

"Sometimes you have to examine your subject by mentally 'walking around' to another angle and entering from a different point of view—like different doors to the same room."

After reading his explanation, I realized that I had misinterpreted what he meant by "contextualizing." I understood this to mean either (a) using a contemporary context to help cast light on a period or episode about which there is little hard information, or (b) using the hard information a biographer does have to infer what happened during the blackout.

Meanwhile, I'm happy to say that thanks to Neil, the confusion my original report inadvertently sewed has been cleared up: see below.


It turns out that I am doing just what Neil recommended—I am off to Ottawa in a couple of weeks to examine Canadian records on internment camps (Fuchs was in one). In fact, I have found that hitting information barriers and having to use one's creativity to come from another angle can lead to even better information than if it is handed to the researcher in a letter or diary.

Interesting, looks like I will have to be doing some serious digging in my next project.
Looking into the near future at interviewing my brother, who has brain damage from an auto accident and is now getting dementia and alzheimers, I anticipate there will be quite a few black holes in his story.