STAYING ON TRACK: THE RED THREAD OF THE NARRATIVE 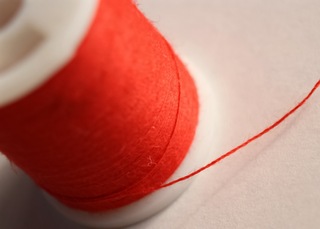 To stay on track, keep an eye on the red thread of your story. (Image via photos-public-domain.com)
As my favorite literary parable suggests (see sidebar), telling the story of a life is a lot like carving an elephant from a block of stone. The "elephant" is the story of someone else's life in potentia, while the block of stone is the mass of unprocessed research in which the story is hiding. Here and in future posts, I want to discuss the creative process of rendering the elephant visible, not only to the eye of the reader but in the mind of the writer.

For me, the single most challenging part of writing biography is keeping my story on track. I'm sure that novelists and memoirists have it tough, too, but when I think about what they do, there's always this snarky little voice somewhere in my head that mutters, "Boy, are they lucky! When they tell a story, they're in the driver's seat. If they get stuck, or puzzled, or lost, all they have to do is fall back on invention or their own experiences. I, on the other hand, have to tell a story from the evidence of my sources alone."

Okay, all you novelists and memoirists, I know it's probably not that simple. (Still, as Bill Maher likes to say: But I'm not wrong, am I?) One of the problems of working entirely from a large mass of information you collect and interpret yourself is that you can quickly lose the thread of the larger story you want to tell. It's not only tiring, but confusing. For a biographer, who usually has to wander for at least several years in a forest of information, it's easy not only to lose sight of the big picture but even to forget what the big picture was supposed to be in the first place.

(Back to top)
There are, however, a few ways to help us stay on course. One way is to imagine the story as a spool of red thread that unrolls as the narrative advances. This imaginary red thread stands for narrative progress and the continuity of the main storyline. The thread's function is to pull both writer and reader through the story, taking us from one crucial point to the next, all the way from the start of the book to the end. Narrative continuity is what gives the events of the story, and hence the book, cohesiveness, significance, and meaning.

The term "red thread," by the way, comes from the expression, "der rote Faden des Erzählens," a German phrase meaning, you will not be too surprised to learn, "the red thread of the narrative." Not long ago, I learned of a French equivalent, "le fil rouge" or "le fil conducteur." When I asked a French friend about it, she exclaimed, "Ah, yes, like the thread that Ariadne gave Theseus to help him through the labyrinth!" I think that thread was gold, but you get the idea.

(Back to top)
We can find and map the "red thread" in any well-written narrative, whether fiction or nonfiction. Robert Massie's most recent biography, Catherine the Great: Portrait of a Woman illustrates this. Massie's story is that of an obscure but idealistic and brilliant daughter of minor German nobility who, in 1745, marries the heir-apparent to the Russian throne. Fired by her dream of becoming the ideal "benevolent despot" of Enlightenment political philosophy, she eventually overthrows her weak spouse and ascends the throne herself. As soon as that happens, however, her devotion to her political ideals begins to be undermined by the realities of ruling Russia. By the end of the story, she has become the despot she aspired to be (just how benevolent depends on the eye of the beholder) but has no sympathy for the French Revolution that her philosophical heroes helped inspire; ironically, she is incapable even of understanding its causes.

Massie's interpretation of Catherine's oft-recounted life isn't new, but he tells it with consummate skill, never straying far from the main story. Despite many twists and turns of family, national, and international politics, including a number of lengthy but necessary digressions, he always keeps his reader aware of the invisible thread in his narrative: the ambitious Catherine's voracious appetite for philosophy and life; her patient ascent to power; her long, gradual hardening once she establishes herself as an absolute monarch.

(Back to top)
How to know if you're still on message, as it were? To begin with, and in the first place, make sure you have a strong grip on the story you want to tell. Try boiling it down to a few sentences, as I did with Massie's story. If you can write a tight summary of it, you're probably ready to start unrolling your spool of thread. If you can't, you may not yet be at the point in your research where you're ready to formulate "the story." Or you might need to clarify for yourself what a "story" really is, and how it differs from "plot" or "theme." (I'll talk about this in a separate post.)

When you think you have a good handle on the central story, write it down on a small piece of paper and tape it to your monitor or stick it on the wall above your desk where you can see it. That way, you can watch it turn from an idea into a full-blown narrative. More important for present purposes, you'll be able to stand back every so often and achieve some needed perspective by reminding yourself of the Big Picture.

It helps to be aware that a writer's original conception of "the story" may change over time, because as we write and do more research we come to understand our subjects better. In fact, you may eventually decide that the story you thought you wanted to tell is different from what fires you up now. That isn't uncommon. Good biography, like good fiction, grows from what surprises its author—from the insights acquired along the way. But as long as the main story is firmly (and preferably literally) within sight, the red thread of your narrative will be, too, and will help you find your way through the labyrinth and not get lost. Or least not permanently.

(Back to top)
3 Comments

Thank you so much for this article on following the narrative thread throughout a biography (or any story for that matter). I have published many human interest articles and am contemplating my first biography. Your reminder to stay focused on the central theme applies to my magazine article writing and causes me to think that if I can keep sight of the "red thread", I can write longer pieces (biography) too! Thank you.

I was once a baby editor at Little, Brown & Co, and one of the things that struck me when I read book proposals from journalists was how good they were at writing succinctly but serially, rather than developing an overarching theme. It's hard after years of developing the essential skills needed to "write short" (which I definitely do not possess!) to make the transition to "writing long." But "writing long" really just involves identifying and fully developing what Vivian Gornick in "The Situation and the Story" calls "the thing the writer has come to say"--the overarching message--and then making every single chapter and paragraph and sentence and episode and character build toward saying it, or illustrating it.

If you attended the "Beginnings and Endings" session at the end of the BIO conference, I'm sure you were as struck as I was by what Debby Applegate and her co-panelists had to say about how fundamental that is: "The thing one has come to say" has to start in the first paragraph and (one way or another) run all the way through the book to the last paragraph.

That demands a somewhat different skill set, and sometimes developing it can be scary and frustrating, but it's not magic. It's a learned skill--and it's a big part of the fun, the discovery, the excitement of writing a biography.

I took a lot of notes at that session and in the next couple of weeks I will try hard to get around to posting them, so hopefully I'll have more for you soon (well, relatively soon) on the subject of "following through."

Thanks for the details on the red thread, I was looking it up with the hope of finding it in other languages.