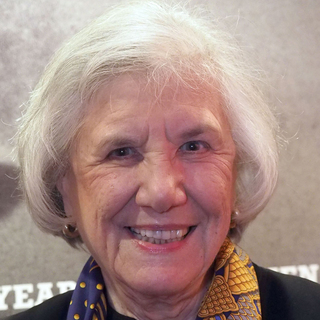 (UConn Humanities Institute)
Deirdre Bair, who has written six biographies, is currently working on a memoir about her experiences in researching and writing Beckett (1978) and Simone de Beauvoir (1990). At the fall, 2017 Dorothy O. Helly Work in Progress Lecture, presented by New York’s Women Writing Women’s Lives Seminar, she talked about her reasons for undertaking a memoir and the challenges for a seasoned biographer who decides to become part of the story.

Bair originally planned “a short book” about all her biographies but was unable to find a framework that would encompass all six, while Beckett and Beauvoir generated more interest than any others.

Bair explained that when these biographies were first published, she felt obliged to withhold some of the information her research had produced—not only because people still living would have been hurt by her revelations but because certain kinds of revelations were deemed “unseemly” in respectable biographies, especially biographies of women. But the passage of time and the shattering of cultural taboos have removed these constraints, and Bair now feels free to add to the public’s understanding of two of the twentieth century's major writers.

(Back to top)
Much of the as-yet untitled memoir will be about working with Beckett and Beauvoir in Paris, where they inhabited the same neighborhood and where Bair met and interviewed them regularly, either at home (Beauvoir) or in cafes, restaurants, and hotel lobbies (Beckett). The interview process with each, however, differed radically. Beckett, secretive and interview-averse, first told Bair that he would “neither help nor hinder her,” then forbade her to take notes. By contrast, Beauvoir, at their first meeting, “cheerfully” told Bair exactly how they would work together: Bair would take down everything Beauvoir said and the result would be Beauvoir’s version of her life. Bair: “I remember how my head sank into my hands as I said, ‘Oh, dear, I think we’re finished before we even get started.’”

Eventually Bair succeeded in securing her independence as a biographer. Knowing that Beauvoir and Beckett detested one another, she told Beauvoir of Beckett’s promise to “neither help nor hinder.” After a long pause, Beauvoir reluctantly replied that “she supposed she would have to work that way as well.” Nevertheless, over the years Beauvoir persisted in trying to control what went into the book, at one point becoming so angry at Bair’s questions that she pushed her bodily out the door.

(Back to top)
An important reason for casting the story behind her first two biographies as a memoir, Bair said, is that when Beckett: A Biography was published in 1978, it drew ferocious attacks from male Beckett scholars infuriated that a young woman had beaten them to the draw. (“So you are the little girl,” one of them told her, “who stuck her hand in the cookie jar and ran off with all the goodies.”) Second-Wave feminism was only starting to have an impact, and at first Bair was dismayed and confused by the attacks.

Before long, however, she decided that having written “the best, most honest book I could” entitled her to hold her head high, ignore the unfair criticism, and get on with her life. She credits the warm encouragement of feminist friends with helping her move past the experience. Four decades after the fact, she said, her intention is not to settle scores but to tell the story of her evolution as a feminist in those years so that younger women can understand “what some of us went through as our generation fought for the opportunities in life and work that we made possible for them to enjoy today.”

(Back to top)
At the same time, recounting that story as a memoir imposes a dilemma on a scholarly biographer and former print journalist. As a biographer-storyteller, Bair had always maintained a balanced detachment, and inserting herself into the narrative raised the thorny question of how to write about herself without violating professional standards that she has hewed to all her life. How and when should she become part of the story? How should she write about her younger self? And how can she insure that the text “will be as factual and objective as I can make it” even as it is based on her own memories? Above all, can she—or, indeed, should she—”bring the scrupulous objectivity and authorial distance that I aimed for in my biographies into a memoir of the fourteen most emotional years of my life?”

To try and reconcile these competing claims, Bair told her audience, she is consulting innovative literary memoirs like Margo Jefferson’s Negroland as well as reading countless biographies, autobiographies, and cultural essays in the hope of finding “points of light” to guide her in the creation of a satisfactory hybrid. She hasn’t found all the answers yet. Still, she said, as a fledgling biographer-memoirist she has found comfort in the opening words of Rousseau’s Confessions: “I have resolved on an enterprise which has no imitator. My purpose is to display a portrait in every way true to nature, and the person I portray will be myself. Simply myself.”

—Adapted and published by permission of The Biographer’s Craft.

Good piece, Donna! I recently finished Jo Baker's book A Country Road, A Tree which, though ostensibly a novel, is actaully all about Beckett. I think you --and Deirdre--would like it if you haven't read it already..