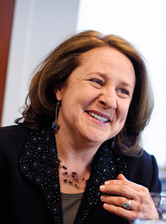 Carla Kaplan: "This book has to be funny."
Carla Kaplan's previous biographies, Zora Neale Hurston: A Life in Letters (2002) and Miss Anne in Harlem: The White Women of the Black Renaissance (2013) made it clear that she likes women rebels.

Her current project, Something to Offend Everyone: The Muckraking Life and Times of Jessica Mitford, which she discussed at the Spring, 2017 Works in Progress Lecture of New York City's Women Writing Women's Lives Seminar, made it clear that she especially likes them when they’re combative, empathetic, and have a talent for being "laugh-out-loud funny"—qualities Jessica Mitford employed to breathe new life into the venerable Gilded Age tradition of muckraking.

(Back to top)
Born in 1917 into a family of down-at-the-heels English gentry, Mitford, called "Decca" by her family and friends, was one of six girls so attractive that they were known as "the beautiful Mitford sisters." However, thanks to their parents' social and political views, which gave fresh meaning to the term "reactionary," three of the sisters as well as Mitford's brother grew up to become avowed fascists. By contrast, little Decca was "one of those children who are born unable to accept what they see as the unfair status quo." (When hardly more than a toddler, Kaplan said, she asked her mother why the country's money couldn't be more evenly distributed, so that more people could enjoy it.)

Prevented from attending school by her father, who considered the outside world "a damned sewer," she educated herself by ploughing through books in the family library and by engaging in witty, mutually devastating arguments with her clever sisters. This ongoing habit of sisterly demolition left a permanent imprint: for the rest of her life, cheerful phrases like, "Do admit I'm right" and "Do give in" remained hallmarks of Mitford's rhetorical style even in ordinary conversation.

Mitford's longing to be "elsewhere"—a word that among the Mitford siblings connoted "anywhere but home"—led her to elope with a second cousin, Esmond Romilly, a nephew of Winston Churchill. In 1939, they emigrated to the United States, where she could blossom as a full-blown radical. After Romilly was killed in the war, she married a Jewish-American civil rights and union lawyer named Robert Treuhaft. They settled down together in the congenial left-wing atmosphere of Oakland, California, and Mitford, now a Communist, threw herself into the cause of civil rights and social justice. (Both she and Treuhaft eventually became disillusioned with the Communist Party and resigned their membership.)

(Back to top)
In 1961, Mitford began an intensive investigation into the unscrupulous business practices used by the American funeral industry to exploit grieving families—a project to which, Kaplan said, she brought the ardor and inventiveness of a pamphleteer. Her research and interviewing for The American Way of Death were both “prodigious,” but Kaplan emphasized that her aim wasn’t journalistic objectivity; rather, it was to marshal the grim details and grisly facts that she knew her audience would be unable to resist (“Do admit I’m right”). When her publisher complained that too many of the details were offensive, Mitford added more.

(Back to top)
The American Way of Death was an instant bestseller. It prompted a congressional investigation into the funeral industry, helped to inspire the film "The Loved One," and hasn't been out of print since it was published. It also made a former British debutante one of the leading lights of American investigative journalism. None of Mitford's subsequent books achieved the popularity of The American Way of Death, but its author remained a beloved literary icon, who, by the time she died in 1996, had amassed “more than five hundred boxes of materials,” of which over twelve thousand items were letters, many from fans.

Kaplan said that Mitford " relished the role of scourge" and felt that "that her targets deserved what they got." At the same time, she also believed that when presented with hard evidence, "average people armed with factual information would make sensible choices" from which positive social change would grow.

(Back to top)
Kaplan acknowledged that dealing with Mitford’s enormous archive poses a serious challenge for her first trade biographer. But a greater challenge is one of craft, since many of Kaplan's younger readers will lack the historical memory that would allow them to appreciate fully what Mitford accomplished by combining facts, wit, and empathy—empathy for her subject’s point of view as well as her readers’—to win an argument.

Pointing out that we live in a time when factual truth is under relentless assault, Kaplan said that she hopes her biography will be able to show the brilliance with which Mitford went about remedying public ignorance. "This book,” she explained, “has to be funny. The more I can capture her own voice, the better this book will be." She has plenty to work with.

—Slightly adapted and published with the permission of The Biographer’s Craft.