WRITING AROUND THE HOLES 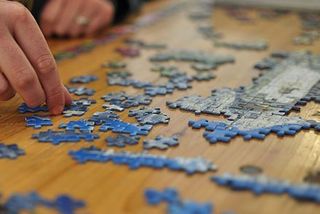 How to get around missing pieces?
A couple of years ago, I posted a report about a Biographers International conference panel on the "black holes" in biography, or areas of missing information.

Another conversation a few weeks ago, this one moderated by James Atlas and carried on by three noted biographers, Ron Chernow, John Matteson, and Stacy Schiff, reminded me again of the "missing pieces" biographers have to anticipate—or, just as often, can't anticipate—on their way to writing a definitive biography. (For the likelihood of doing that, see the conclusion of "THE TRUTH": BIOGRAPHY'S MOVING TARGET.) More reflections inspired by the discussion: • JOHN MATTESON: CHOOSING A SUBJECT AND WHY WE WRITE, • SHOULD WRITING BE FUN?

Below are some of the things the panelists had to say about this perennially interesting topic.

(Back to top)
1. Arranging for a Comb Over

According to Schiff, who is the author of Vera: Mrs. Vladimir Nabokov, sometimes "you find yourself writing around the holes in the material and going wherever the material takes you." Since that isn't always where the biographer actually wants the narrative to go, it may become "your job to somehow arrange for a kind of comb over, and hope that nobody notices the holes."

Sometimes the comb over is required on a grander scale than first expected. "I promised the publisher," said Schiff, "that I would write my book on the Nabokovs based on their correspondence, only to discover that we had only one side of the correspondence": if Vera Nabokov's papers still existed, they were unavailable. "I made multiple trips to Switzerland to try to find the other side of the correspondence every time papers turned up—and of course it never turned up." Fortunately, Schiff was able to draw on numerous other sources to create a portrait of the woman who was not only Nabokov's wife but his editor, secretary, business manager, and archivist, and Vera won a Pulitzer Prize. As for the missing papers, she said, "My greatest nightmare is that of course they will now turn up."

(Back to top)
2. Putting a Different Spin on an Enigma

While Ron Chernow, author of Titan: The Life of John D. Rockefeller, Sr., believes that people "can't help but reveal themselves," he reflected that he himself always seems to choose subjects whose personalities seem not merely reserved but practically inaccessible.

"When I decided to do the biography of John D. Rockefeller...I had unrestricted access to...tens of thousands of letters that Rockefeller wrote as the head of Standard Oil, and a typical Rockefeller letter [was], "Dear Sir, read yours of the twenty-sixth, would recommend that you proceed with all due caution," signed "John D. Rockefeller." There were never any proper nouns. He was always describing things in this glancing, indirect way, and I realized that he was always writing things as if it might someday fall into the hands of an investigating committee or a prosecuting attorney....

I felt that I had unrestricted access to his papers, and I was expecting that I would find one explosive revelation after another, and I was just coming up dry; he was baffling me, day after day, letter after letter. And I was describing this situation to my wife, and I was saying, "You know, this was a terrible mistake to do this book; this man is completely closed and impenetrable." I started describing the way he wrote—he was directing the largest business empire in the world through all of these little two- and three-sentence letters—and I was getting angrier and angrier. I looked across the table at my wife, who was smiling.

I said, "What are you smiling at? I just made this catastrophic mistake, doing this book!" And she said to me, "What you're describing is absolutely fascinating....A man who was so smart and so secretive that he could run this world-wide empire through all these winks and hints and cues....You've found a true original, but you're not seeing the originality that's right in front of you." Rockefeller was actually telling me more about himself through all these cryptic little notes he was writing....Gave a whole different spin to it.

(Back to top)
3. Finessing the Holes

John Matteson, whose first book, Eden's Outcasts, was a biography of Louisa May Alcott and her father, Bronson Alcott, addressed the tension between being a historian and being a storyteller. ("I think that every aspiring biographer asks, "How much can you say, 'Must have,' or 'May have'—how much can you speculate?") As an example, he cited a problem he ran into when he was planning a crucial moment in Eden's Outcasts. In the scene, Louisa and her father would say farewell to her youngest sister, May, as May set sail for Europe, a farewell Matteson, but not the Alcotts, knew was especially moving because it would prove to be the last time they would ever see her.

(Back to top)
Wanting to capture the full poignancy of an important event in family history, he turned to the Alcotts' journals—the Alcotts were inveterate diary-keepers who made a practice of reading aloud to each other from their journals every day—in the expectation of finding the emotional color he needed for the scene. To his dismay, "the journals gave me the date, they gave me the name of the ship, they gave me the color of the hat that May was wearing, and they didn't say a word about what either Bronson or Louisa were thinking....I wanted really to bring [this dramatic moment] alive, and there was nothing in the record that would support it."

Matteson's solution:: "Bronson and Louisa escorted her as far as the dock. Prey to all the throat-constricting feelings that came with parting, they stood and watched as their blue-clad dear girl waved her handkerchief and the ship receded toward the horizon." As a historian, he couldn't actually "know" if the Alcotts felt "throat-constricting emotions." As a narrator, however, Matteson felt that sense, if nothing else, dictated that calling the affectionate family "prey" to such emotions justified a biographer's liberty. (Matteson's example prompted Atlas to comment that the critic Dwight Macdonald, who was his first editor, never permitted such obfuscations, writing "weasel" next to them in the margin—"The word has rung in my ears ever since.")

(Back to top)
Does Matteson's example blur the line between fiction and nonfiction? I didn't think so, but then, as a storyteller who yearns to bring history alive, I'm inclined to come down on the side of other weasels, or at least ask that we be given the benefit of the doubt. The panelists, however, moved on, leaving unresolved the question of how much poetic license a biographer should be permitted.

Makes you wonder, doesn't it, whether Plato would have found a place in his ideal republic for the biographers?