BAREFOOT IN THE ARCHIVE 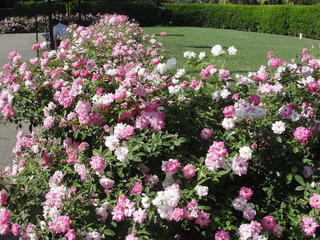 October at the Huntington (with thanks to Catherine Wehry)
In my report on a lecture given by biographer Richard Holmes, I didn't mention that at one point he recalled arriving in a downpour for a discussion at the famous but notoriously mud-soaked Hay-on-Wye literary festival in Wales and being greeted by a moderator who said to him, in a lilting Welsh accent, “Ah, Mr. Holmes. Fine weather for biographers! Plenty of feet of clay!”

*
It wasn't exactly clear whether the target of this whimsical reminder of the debunking tendencies of biography were the people Holmes and his fellow biographers wrote about or biographers themselves—probably both. Anyway, the implications of this amusing story were in the back of my mind as I arrived at the Huntington Library and Gardens in San Marino, California last week to look up the answers to a couple of questions.

(Back to top)
I’m not a natural traveler, except by armchair. But visiting the places where my subjects and the people who knew them still hang out—that is, the archives that hold their correspondence, manuscripts, photographs, and the other detritus of their lives—has always been, for me, an experience like no other.

October in the San Gabriel Valley can be scorching, but last week the temperature was in the mid-seventies. The sun was mild and the walk that led to the research building was lined with masses of pink and white roses just past their prime and fragrant in the warm sunshine. I showed my reader i.d. to the guard and headed straight for the section of the old-fashioned oak library catalogue containing the index cards that researchers use to find correspondence.

(Back to top)
The drawers I consult most frequently are organized alphabetically by the author of the letter, telegram, or whatever the document happens to be; then chronologically by the name of the recipient, along with the number of pieces associated with each author-recipient pair.

*
The biographer is a kind of detective, but also a kind of snoop, and I do sometimes ask myself whether Sara, my heroine, would, if she were alive today, object to some of what I know I will have to say about her. But I’ve made myself responsible for her story, and that story moves and fascinates me not only because of her exceptional qualities but because of her flaws and weaknesses. The exceptional qualities inspire me; the flaws make me think about how I want to live myself and what it means to live with other people.

My last subject, Sattareh Farman Farmaian, used to quote a Persian saying: “We learn good behavior from those who behave badly to us.” In itself, writing biography is an ethically neutral act. But because the act connects us with others, it always has ethical implications, including implications for the writer's relationship with the community, the polis. Both angels’ wings and feet of clay can enlarge our understanding of the human condition and of ourselves. If we do our job well, we can pass on some of that understanding to our readers.

Then again, it never hurts to ask once in a while: Can anything that feels this good be bad?