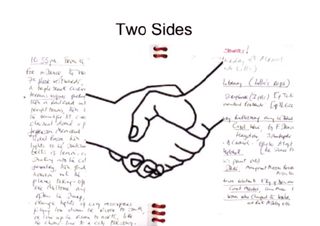 Holmes used this image to illustrate biography's "handshake." (By permission of Richard Holmes)
In fifty years of writing biography, the innovative and prolific Richard Holmes has become known to his fellow practitioners as "a biographer's biographer" for his reflections on the art and craft of biography (Footsteps: Adventures of a Romantic Biographer and Sidetracks: Explorations of a Romantic Biographer). At the 2014 annual Leon Levy Center Lecture in New York, he shared some of his insights with a rapt audience.

Holmes was about eighteen when he decided to hike through the Cèvennes in an effort to retrace the route Robert Louis Stevenson had taken with his donkey Modestine in 1878. Showing the audience a picture of two pages in a lined spiral notebook, he explained how he recorded factual, “objective” observations on one page, and, on the page opposite, his own responses—“the subjective story, the dream story, the inner story of my pursuit.” Thus his research notes, he said, became a mirror of Stevenson’s past (the "scientific" evidence of the writer’s journey) and Holmes’ own present (the biographer's emotional responses to the evidence he recorded).

(Back to top)
Holmes now regards travel to places where the subject lived and worked as the "physical and metaphysical pursuit" of a life, and an indispensable tool for a biographer, especially the literary biographer. Trying to discover the sources of "that hope and creativity" that engenders art, however, requires not only discernment but a continuous balancing of circumspection and emotional empathy. A subject's interior or "spiritual" life ("whether religious or not"), because it is hidden, is "far more delicate and difficult of access" than other areas of existence (including, Holmes observed rather pointedly, a subject's sex life).

To penetrate the interior reality and bring it to life for both biographer and reader, the biographer must have the courage to draw not only on objective evidence but also on the subjective feelings and intuition that arise out of the writer's own empathy for a subject's emotional experience. For that, Holmes said, there is no substitute for being there.

(Back to top)
As an example, he described an incident from the five years he spent searching for the sources of Shelley's poetry (Shelley: The Pursuit, 1974). Puzzled by the fact that in "Adonais," Shelley, an avowed atheist, had envisioned "a kind of immortality" for the poet John Keats, he uncovered archival evidence that the poet had earlier tried to write poems about his young son William, who had died of a fever in Rome. Fragments of those attempts eventually found their way into "Adonais." However, Holmes continued to find the poem hard to reconcile with Shelley's professed atheism.

Then, while reviewing photographs he had taken of the garden of the house in Italy where Shelley had played with his son, Holmes noticed the concealed figure of a small boy watching him curiously from among the trees. Several seconds passed before the startled biographer realized that the boy was not the ghost of William Shelley but the son of the house's current Italian owners, come to see what he was doing.

Those seconds of surrender to an illusion, Holmes said, brought home to him how strongly he empathized with Shelley's overwhelming loss and grief and deepened his understanding of his longing to repair his loss. "I accepted his atheism intellectually," he reflected. "....[But] I also realized that at some level Shelley believed in some sort of creative immortality, [a belief] that he could only express in his poetry." Holmes' moments of disorientation, he said, also revealed the fine line a biographer always has to walk between detachment and empathy. "That momentary illusion taught me that....the biographer can become far more emotionally involved with the subject than he realizes. That is a good and necessary thing, so long as he can finally step back."

(Back to top)
Years of both writing biography and teaching it (Holmes was the founding director of an MA program in biography at the University of East Anglia) have led him to think of biography as a collective enterprise that can reach not only across disciplines but across generations, cultures, and different ways of life. "I believe passionately in the biographical form and its power of truth-telling and transformation in lives," he told his listeners. "I also believe that it addresses the meeting of the two great modes of human discovery....the meeting of imaginative literature and those who write it, and science and those who make it. That is one of the new great subjects for the future of biography, particularly here in America. You can say that if our world is to be saved, we must understand it both scientifically and imaginatively."

Quoting Sylvia Plath, who said that "the novel is an open hand, poetry a clenched fist," he projected another image from one of his notebooks ("Number 209"), this one showing a drawing of two hands clasped in a handshake. "Biography, then, is a handshake across time, across disciplines, across genders, across whole ways of life. It is an act of friendship. It is a way of keeping the biographer's notebook open on both sides of that endless question about the mysteriousness of life. What was this human life really like, and what does it mean to us now? In this sense, biography is not merely a mode of historical inquiry. It is an act of imaginative faith."

For a video of Holmes' lecture, click here. For some thoughts on the creative implications of the lecture, read "Is There a 'Biographer's Imagination'?"