MANAGING YOUR RESEARCH: A "DEEP CHRONO" TIMELINE CAN HELP 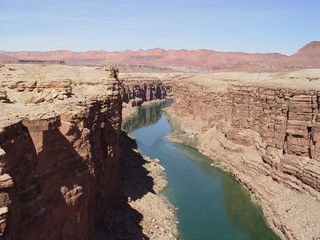 An example of very, very deep chronology; a river runs through it. (Photo: J. David Rogers)
I know I promised to get back to the subject of organizing primary research in biography, and I'll return to talking about data files and headnotes soon. Before that, however, I'd like to pass on an idea that comes to us courtesy of—get ready—the CIA.

*
First, a brief but relevant digression. In a post last year, I discussed the essential "red thread" of narrative and how important it is to keep an eye on it at all times.

That's easier said than done. Information often has a way of piling up faster than the shape of the storyline, and as the pile grows, so does the job of organizing it, sorting through it, and trying to understand what it all means. Moreover, it usually keeps on growing long after writing has begun. Even when we think we've "done all the research," new information can turn up of its own accord, e.g., in the form of an unexpected trove of letters or an interview with someone we didn't think would talk to us. (You can read what Deirdre Bair and Carol Sklenicka have to say about this in my report on "Dealing with Black Holes".)

Finally, new data can change the meaning of old, while the process of incorporating information into a narrative can make us change our minds about something whose meaning we thought we already understood, forcing us to go back and dig deeper.

For all these reasons, writing a biography is a little like rappelling down the side of the Grand Canyon. You know that if you're careful, methodical, and apply the right skills to whatever layer of rock you're working on the moment, eventually you'll get down to the River of Meaning, which is your goal. Usually, though, you can't stop to admire the view because you have to give most of your time and attention to grappling with the rock face. You can't afford to get sloppy or confused, or make serious errors of fact or omission.

Still, there are ways to make the going easier. One is a form of timeline the folks at Langley apparently call a "deep chrono." (I will now forsake the metaphorical realms of geology for the real-world realm of espionage. Hah, I bet you thought I was going to say something about getting down the rock face by clinging to the Red Thread, didn't you?)

(Back to top)
According to investigative journalist Thomas Powers, author of The Man Who Kept the Secrets : Richard Helms and the CIA, the "deep chrono"—a detailed chronological timeline—is one of the most important tools of intelligence.

Powers discussed this term, which he learned from James Jesus Angleton, the CIA's former chief of counterintelligence, during a panel discussion a couple of years ago. A deep chrono, he explained, is the verbatim extraction of all the intelligence on a given subject, organized by date and (if available) time of day. Its purpose is to reconstruct an accurate history of a major event or the history or movements of someone under surveillance.

New information is always incorporated into the existing data in exact chronological order, by date and time; until it is complete, its compilers make no attempt reconcile contradictions. Gradually, as more and more information is added to the timeline, a pattern emerges.

(Back to top)
Powers, who has published nine books, including several biographies, was apparently so taken with the possibilities of this kind of timeline that he began applying it to his own research. "The chronology," he said, "tells the story almost every time."

Probably not many of us will ever need to assess an intelligence threat. Nevertheless, for a biographer the advantages of compiling a chronology from our subject's writings, public utterances, private letters, diaries, photographs, interviews, and so on—all the detritus a lifetime leaves—are considerable.

A timeline constructed from evidence is more than just an outline. It allows the researcher to see the story as it unfolds; to test the viability of a projected narrative arc, whether in a single chapter or the entire book; and to determine where holes exist or whether a contradiction calls for further detective work. In short, it helps a biographer negotiate the rock layers while holding in mind the story that runs through them.

And now to return to the subject of organizing. The next two posts will be about converting primary research files—the biographer's equivalent of an intelligence file—into, first, a searchable directory of the file itself and then into a biographer's version of a "deep chrono" timeline.