BEFORE THE APOCALYPSE, SOME WRITING ADVICE TO MYSELF 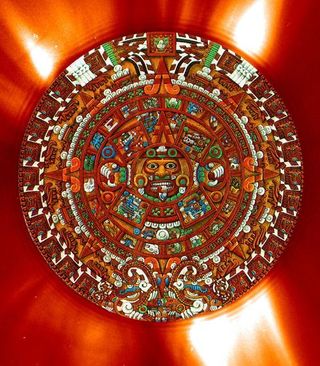 (Image: National Aeronautics and Space Administration)
I love this time of year. I've pretty much given up making New Year's resolutions, but late December is when I'm allowed by custom—no, obligated—to kick back and think about making a good start in 2013.

Of course, given the date of this post—December 21, 2012—thinking about next year could be a waste of time. As I write, it's 8 PM Eastern Standard Time, and the apocalypse supposedly predicted by the Mayan calendar might still arrive—I don't believe the predictions specify an e.t.a. (The calendar here is Aztec, by the way. Sue me, I liked it.) Nonetheless, I will take the optimistic view and assume that we'll all still be around four hours from now.

Here, then, is my wholly unsolicited advice to myself on how to be a happy writer in 2013.

(Back to top)
1. Whenever you're writing, doing research, thinking about the story, or just doing filing, keep a mental eye on the next thing you plan to be doing—the next section of the chapter, the next research task, the next step you will take in order to make your book a reality.

2. Keep the Big Picture in sight. Know your priorities and focus on them. (See "Staying on Track: The Red Thread of the Narrative.")

3. Strive for progress, not perfection. You may think your best days are the ones when you achieve some breakthrough insight, or write the greatest paragraph anyone has ever written or will write. But those are just your good days. Your best days are the ones where you can pat yourself on the back for small but genuine measures of progress, such as finishing a section.

5. Limit the time you spend writing, and quit while you're ahead. Don't stay at your desk so long that you become fatigued or, worse, numb. If you tend to be less productive after a couple of hours, break for lunch then instead of an hour later. If you're not at your best after 3:30, quit writing at 3:15 and do other tasks.

6. If your writing instinct keeps saying the same thing over and over again, pay attention. For instance, if you can't get beyond a certain paragraph, a certain topic, or an important digression and a small voice within won't stop saying, "Writing this is boring me into a coma," trust that voice. It may be urging you to move on to something that you'd enjoy more and that would give you perspective on the problem. Or maybe it's an indication that what's hanging you up isn't adding anything to the story and that's why the struggle seems boring and pointless. (On the other hand, never trust that voice that says, "I'll never write another word." That voice doesn't know diddly-squat.)

(Back to top)
7. A biography is always a moving target. Don't be afraid of the unexpected. Take new information in stride and have faith in your ability to incorporate it into the story you're telling, even if you have to revise an opinion or rewrite passages. New evidence will always turn up, sometimes even after the book is published. The new evidence you uncover now is a gift; it's also an opportunity.

8. Don't worry about what other people do or say, either in your own circles or in the media. Pay attention to the life around you, but don't be intimidated, whether by offhand remarks from well- (or ill-) intentioned friends and acquaintances or by good (or bad) reviews other people get. There's room in the world for you as well for them.

9. Aim to write the best book you can—not the most "definitive," the biggest seller, or one that will attract critical acclaim. Even a good publisher can't predict with certainty what will happen to a book once it's published. You will never have more control over the fate of your book than you do now.

So take whatever steps you must to write the best book you're able to write at this time. If you do, no matter what its fate is, you'll always be proud of what you created.

10. Have patience. Aim for small daily victories. Take things one step at a time.

(Back to top)
1 Comments

This is great advice for any writer, not just a biographer. Thanks