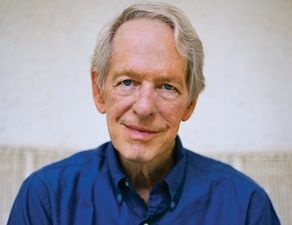 Robert Massie: Storytellers have "three ingredients" to think about. (Photo © Alex Remnick)
Robert K. Massie, the journalist and historian whose gift for vivid narrative has made him the preeminent American biographer of Russian royals, makes his job sound easy. “I am a storyteller,” he explains modestly, adding that he writes biography because “telling stories about people in the past is important to everyone trying to understand who we are and where we come from.”

Massie’s remarks came as part of the fifth annual Leon Levy Biography Lecture, held last month at the CUNY Graduate Center. The talk followed his recent winning of the 2012 PEN/Jacqueline Bograd Weld Award for Biography for Catherine the Great: A Woman’s Life. Among his other literary successes, Massie’s life of Peter the Great won the 1981 Pulitzer Prize, while Nicholas and Alexandra was a durable New York Times bestseller.

(Back to top)
Massie told the audience that a biographer whose aim is to “fully embrace the story being told” will find himself working with three key ingredients. The first of these, he said, is relevance. The reader must have the sense that the life under study is important because it is “part of a chain that affects his own life.” This sense of connection may simply be the result of the subject’s fame or the fame of the times in which she or he lived. Conveying that sense of relevance, however, is vital for holding the reader’s interest.

The second element, and perhaps the best known, is suspense. Usually suspense is associated with not knowing how a story will end. But can it be employed when the story—such as that of Julius Caesar—is so famous that the reader already knows how things will turn out? Massie’s answer is yes, as long as the biographer can make the reader experience difficult moments and challenges as the subject must have—that is, without knowing what the outcome will be. Telling the story this way, he said, isn’t “gimmickry,” as “the subject never knew, any more than we know in our own lives, how his day, or life, would end.”

Massie’s third ingredient is immediacy, a sense of which depends on the wealth of detail the biographer brings to the story. The details may be sensory ones that create a vivid and individualized portrait—the familiar tone of voice, a characteristic gesture—or an atmosphere that pulls the reader into the scene: “. . . the smell of the meat of someone’s dinner, the tobacco in his pipe, the sweat on his shirt. The full human presence.” Details can also be emotional, as when he recounted Catherine’s reaction to the first time her husband shouted at her. At the same time, the biographer’s aim should not be the accumulation of details or information for their own sake; the goal is to provide just enough to make people and scenes come alive for the reader.

(Back to top)
Massie traces the roots of his passion for biography and history to his teenage years during World War II. Intensely aware of the unseen war beyond American borders, whose outcome was as yet unknown, he feared that the war “would end in the Smoky Mountains of Tennessee.” He dealt with the suspense by imagining the details of every major event as if he were experiencing them directly. Years later he applied the lessons he learned through his youthful experience of his own era to his examinations of history and of “lives that help us learn who and why we are.”

—Adapted from the October, 2012 issue of The Biographer's Craft. Reproduced by permission of the editor.