THE POWER OF PLACE: ISTANBUL SHUTS OUT AMHERST 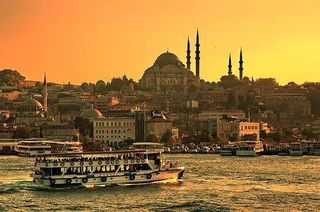 It's never smart for anyone working on a biography to underestimate the power of place. Especially when the writer is reading someone else's work.

&nbspWhen I went on vacation two weeks ago, I brought along Lives Like Loaded Guns, the biography of Emily Dickinson by Lyndall Gordon, to read on the transatlantic leg of a trip to Istanbul. Having already started it, and being deeply interested in a poet who had a considerable influence on my own heroine, Sara Bard Field, I was determined and eager to finish it.

But I couldn't. Place, in this case the one I was headed for, shut out my ability to imagine anything else. Absurd as it sounds, I found it impossible to take in what I was reading about Emily Dickinson and her brother's affair because the location, Amherst, seemed irreconcilable with where I was going.

Back to top
"Place" in biography derives its power from more than just an accurate description of the setting or surroundings. The biographer's literary imagination is fundamentally a visual one, and the sine qua non for bringing a protagonist alive is the ability to create emotionally-charged images of a life lived in a specific place or places: being born and growing up there; falling in love there; fleeing from or writing poetry in or dying there.

But places with a mythic power of their own, like New York, Paris, or Los Angeles, take up a lot of mental megabytes, and Istanbul, which under the name of Constantinople was the capital of the Byzantine empire, is such a place. With Byzantium on the brain, my mind had no more room for nineteenth-century New England than it would have had, say, for Copland's "Appalachian Spring" during the magnificent cacophony of the maghrib, the call to prayer, rolling across the hills of Istanbul at sunset.

I couldn't find a video to illustrate this for you with a sound track that conveys how awe-inspiring that sound is. To understand, however, how the idea of Istanbul at sunset might lead one's thoughts away from Victorian New England, see the above photograph, which I came across on qmannola.tumblr.com.

(O qmannola of tumblr! Is that splendid photograph of the Mosque of Suleyman the Magnificent yours or another's? If yours, O cogent curator of Canon, cunning custodian of Leica, puissant pundit of Pentax, Shadow of Sony on Earth, may it please you to have it displayed on this our website, which is strictly noncommercial. If not, though, we would be glad to know where you found it, that we might give credit to its true author.)

Back to top
*
I must say that Lufthansa didn't help my efforts to concentrate on the Belle of Amherst and her family's shenanigans. For reasons known only to itself, the airline bumped us up to business class, which meant that I spent the better part of a seven-and-a-half hour flight to Munich deciding which of several hundred movies to watch and then which of several thousand CDs to listen to.

The rest of the flight was devoted to trying to figure out the ergonomic controls on my German-designed seat, which was like trying to understand the dashboard on the space shuttle Atlantis. By the time we arrived in Munich to connect with our flight to Istanbul, I was so paralyzed by indecision that they had to wheel me off the plane on the duty-free cart.

I have on occasion noticed that Germans sometimes tend to overthink these things. Flying above my pay grade, however, wasn't really the problem. The problem was that nothing but a poem by Emily Dickinson herself, or maybe one by John Donne, could contain, as though by the predetermined harmony of opposites, two places as mutually contradictory as Constantinople and Massachusetts.