ELEPHANT STALKERS ARE ORGANIZED, PART ONE 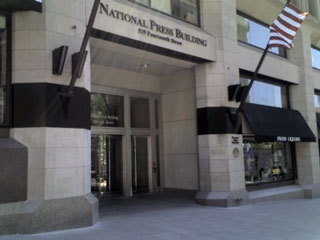 I'm an avid member of Biographers International Organization, the acronym of which, amazingly enough, is BIO. Anyone with an interest in writing (or reading) biography, narrative nonfiction, or history should join BIO, though it's mostly for practicing long-distance elephant stalkers like me.

Last month I went down to Washington, D.C. to participate in the Second Annual Compleat Biographer Conference on May 21. Incidentally, if you've ever stopped to wonder, as I just did, if you've been pronouncing that word right, "compleat" is indeed a homonym of "complete" and pronounced the same way. (Whew!)

The festivities took place at the National Press Club, and it was clear that everyone was having a splendid time jawing away about tracking down a ninety-year-old former lover of their elephant in Schenectady and finding a trunkful—no pun intended—of elephant letters stashed in the basement. When novelists get together at parties, they talk (I'm told) about their agents and how their publisher didn't do enough for the book. Biographers, on the other hand, get off on this sort of thing.

I was on a panel called "Organizing Your Research." Since we were allowed to talk about whatever we wanted as long as it was relevant to the topic, I talked about—well, about filing. The fact that this is one of my favorite subjects may say something about what kind of life you have to lead if you write biography, narrative nonfiction, or history.

To be honest, I would prefer just to read lots of stuff about my elephant and then throw any notes I've made in a drawer, which is probably how most writers start researching a subject. However, sooner or later I usually realize that eventually I may want to recall something I read, or even use it when writing. Also, I prefer to reserve most of my mental energy for the hard work of telling a story, and since going nuts is bad for mental energy, we all need a filing system that won't drive us slowly insane.

I'll list a few filing habits that help keep writers sane in my next post. For now, let me close with the maxim, Ab tabulariis rationaliis tranquillitas, which is Latin for "Don't just throw your stuff in a drawer." Those Romans, they knew a lot.

Click here to see all my posts on organizing your research.

Your good knowledge and kindness in playing with all the pieces were very useful. I don’t know what I would have done if I had not encountered such a step like this.