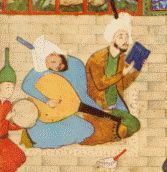 "Voice" is the instrument with which a writer tells the story. For a biographer, as for other writers of narrative, feeling confident that one has found "the right voice" is vital for having the authority and conviction necessary to narrate the life story of another human being.

But voice is hard to define. It's not the same thing as "tone." With it, the writer is king (or queen) of the hill; without it, life is nothing but an uphill slog. And as every writer knows, it can't be taught in a workshop; either it comes or it doesn't. When it comes, as it usually does, the world is your oyster. Until then—well, as they say over in Brooklyn, fuggettaboutit.

• "Finding Our Voice", now posted at Speaking of Biography: Articles on the Biographer's Craft, describes my own search for the right voice when I set out to narrate the dramatic story of DAUGHTER OF PERSIA, a co-authored first-person memoir in which I recounted the life of my Iranian collaborator, Sattareh Farman Farmaian. Raised in the harem compound of her father, a prince with eight wives, thirty-six children, and a thousand servants, "Satti" grew up to bring modern social work and the birth control movement to Iran, only to be forced to flee for her life when the Islamic Revolution began.

I'd love to hear about the experiences other biographers and nonfiction writers have had with this fascinating aspect of the writer's craft. Enter your comments below.

For me the voice is the beginning. When I have the voice in my head, it just speaks, words flow onto the paper (OK screen) and I am happy.

Anybody remember the mother in "The World According to Garp"? She spent years writing a novel (or was it a memoir?) that just didn't work. Finally, some small thing happened that made her write a single sentence, and the sentence was written in the right voice for the book she wanted to write. She wrote it straight through, and it became a huge best seller, etc.

Not that finding the right voice is any guarantee of that. :) But Irving was right about the voice.