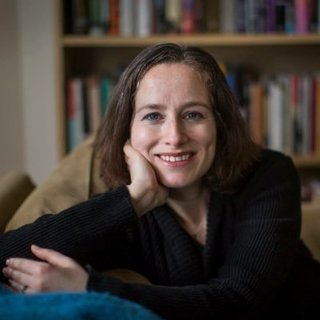 Ruth Franklin
For fans of Shirley Jackson ("The Lottery"), an intriguing report by Women Writing Women's Lives member Evelyn Barish (The Double Life of Paul De Man) on a talk given by another member, Ruth Franklin, on her upcoming biography of Jackson (to be published September, 2016).

Barish's report appeared in the April, 2016 newsletter of the Biographers International Organization, which is dedicated to fostering the community of biographers worldwide. For more reports, click on "TBC reports" in the sidebar.

Ruth Franklin intends her biography of Shirley Jackson to claim a place for the novelist where she belongs: among the great American writers of her era—Saul Bellow, J. D. Salinger, Mailer, and the others—all men—who dominated the 1950s. Franklin discussed Shirley Jackson: A Rather Haunted Life (Liveright/W. W. Norton) at the Dorothy O. Helly Works in Progress Lecture presented by Women Writing Women’s Lives at the CUNY Graduate Center in New York on March 14. Franklin’s book will appear in September 2016 and includes caricatures by Jackson herself.

Most Americans know Shirley Jackson as the author of the chilling, deeply enigmatic short story, “The Lottery,” but she was an exceptionally successful novelist as well. Franklin, author of A Thousand Darknesses: Lies and Truths in Holocaust Fiction,was a senior editor of The New Republic, and her biography has already generated considerable buzz.

“I believe a biographer must be committed,” Franklin said in an interview. She means to demonstrate not only that Jackson was a “pre- or proto-feminist,” but that the only reason her other influential and very popular works have not yet received due recognition—they are omitted from every canon—is that they deal exclusively with women and their lives in that era. The “domestic horror” in Jackson’s work reflects “the pointless violence and inhumanity of the readers’ own lives.”

(Back to top)
Shirley Jackson (1916–1965) had the prototypical existence of women of the 1940s and 1950s, so powerfully described—and changed—by Betty Friedan’s work beginning in 1963. Marrying soon after graduating in 1939, she had four children within a few years, but never stopped the writing she had begun while still an adolescent. Her ongoing theme of doubleness appeared from the beginning when she wrote two diaries: one a typical young girl’s reflections, the other much darker which she kept entirely secret from her mother, a wealthy socialite who was always deeply critical of her daughter’s perceived shortcomings.

Writing came easily to Jackson. The idea for “The Lottery,” which is read by most American students, occurred to her, she said, one morning when, already pregnant with her third child, she was taking her son to school while pushing her second baby’s pram uphill in the small Vermont town where they lived. She went home, began writing and had finished the story by the time her son came home for lunch. That tale of deep and inexplicable horror and hatred in a small village, published in The New Yorker in 1948, drew more letters than any other they had ever printed. Jackson read them all. Most readers were puzzled, she said, but some wanted directions to the town to attend the ritual stoning. It was one of many fictions she produced that involve the demonic, and she enjoyed her reputation as a witch. A commentator wrote that Shirley Jackson “writes not with a pen but a broomstick.”

(Back to top)
Her novel The Haunting of Hill House was profitably sold to the movies, becoming an excellent film in 1963 with Claire Bloom and Julie Harris—a classic haunted house story. Jackson’s work met with increasing success and she made a great deal of money. Jackson’s husband was Stanley Edgar Hyman, a literary critic with many writer friends and the author himself of two books. They met in college and he immediately recognized his wife’s talent, but the connection was difficult, for from the beginning he demanded an open marriage. Jackson gave her unwilling assent, but his incessant affairs, often with students at Bennington College where he taught, were deeply painful to her, especially because he both told her about them and criticized her appearance. Less prolific than she, he came to resent her success while pressing her to produce the widely popular books that made them wealthy.

Jackson’s fiction was both dark and humorous, and she published six novels and dozens of short stores. Early on she became the real breadwinner, selling to the big women’s magazines; these paid very well and led to publishing Life Among the Savages and Raising Demons, collections of stories about herself and her children.

(Back to top)
However, stress, dieting, amphetamines, and alcohol—both partners drank very heavily—took their toll. Jackson died in her sleep from a heart attack in 1965 at the age of 48.

Ruth Franklin has enjoyed writing biography. “It’s more fun,” she said. Her subject’s letters and papers, however, remain unedited and uncollected, a lack that often befalls women’s materials and presents serious challenges for a writer. Franklin persisted, however, unearthing much new material, some in garages and some hidden among Hyman’s papers in the Library of Congress, which, true to the norms of that era, bought his papers, but not Jackson’s.

Reproduced 2016 by permission of The Biographer's Craft