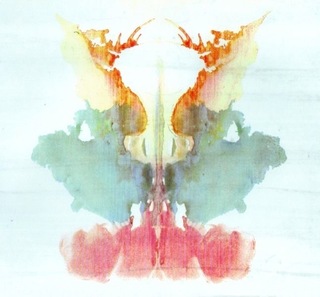 Rorschach Inkblot No. 9 (Wikipedia)
Usually on Sunday morning I open the New York Times and go straight to the Styles section, where the "Social IQs" column is. "Social IQs" gives advice to the socially perplexed, and reading it gives me hope of becoming the polite, perspicacious, socially intelligent human being I imagine its author, Philip Galanes, to be. Yesterday, however, I got hooked instead by a witty, thought-provoking piece in the Opinion section, "The Dual Lives of the Biographer."

According to the article's author, Stacy Schiff, biographers lead two lives: their own and the subject's. About their own, they are as clueless as anyone else. (For example, I'm not at all sure what Philip Galanes would have said to my yelling, "Turn off your cell phone, jerk!" to the text-messaging dolt a few rows down in the movie theater where we went to see "Lincoln" the other day.) This cluelessness, says Schiff, is why they need to live someone else's life. She thinks that immersing ourselves in another life so that we can "pin it to the page" makes us feel briefly in control of things, in a way that the messiness of daily reality makes impossible.

Our journey to this existential nirvana, though, takes a lot of mental muscle. "Reality," as Schiff also points out, "does not easily give up meaning; it's the biographer's job to clobber it into submission. You're meant not only to tame it but to extract substance, to identify cause and axiomatic effect. You subsist on the tactical omissions [in the subject's statements], the hollow words, the oddly unconnected dots."

It probably says more about me than about Schiff that I was utterly charmed by the phrase, "clobbering reality into submission." I probably never met an ellipsis I didn't like, and nothing will stop me from trying to fill in a blank if I think that answering a question is important.

For instance, when I began writing my first book, my co-author and subject, a social worker who had founded a school in Iran to help the poor, couldn't explain to me what had led to her arrest and near-execution at the hands of her own students, and it took us nearly four years to reconstruct the historical, political, and personal circumstances that led to her betrayal and downfall. Similarly, it will take me an entire narrative—that is, an entire lifetime, my subject's—to understand why the woman whose life I've been immersed in for more than a decade, American suffragist and poet Sara Bard Field, was unable find a poetic voice for herself until middle age, yet did so then in response to the worst loss I can imagine. We can't answer the questions the detritus of a life leaves unless we immerse ourselves in it, and inevitably that takes time, because the detritus is always full of holes.

(Back to top)
Maybe I like filling in all those blanks because for a writer, biography is actually a kind of Rorschach test. We all exist in a state of permanent flux, which means that we have no choice but to live with incompleteness and unmeaning. The inchoate Other that floats in the mind of a biographer has the potential to become our complete, final, meaningful self. It's as though we ourselves are one half of a Rorschach inkblot and the subject is the other half—the one we can see, as opposed to the one we can't.

I got so interested in this possibility that when I finished Schiff's article I went and looked up "Rorschach Test" in Wikipedia before I rushed off to read "Social IQs." According to Wiki, there are ten different inkblot cards in the Rorschach armamentarium, each supposedly revealing something different about the observer. I didn't see anything I could relate to until I came to the ninth inkblot, but that one sounded just right. Here's what Wiki says about Inkblot Number Nine:

And indeed, I did feel a strange urge to clobber Inkblot Number Nine into submission, which proves beyond doubt that I, and perhaps many other biographers, have trouble dealing with unstructured data. But it also explains why imposing a story on a shadow-self with whatever tools and experience my own (messy) reality affords me has always been so attractive to me. Interpreting the evidence I dig up of someone else's reality gives my opposite number on the inkblot completeness, order, and meaning.

I'm sure this is a big reason why biographers are driven to solve the mysteries and fill in the blanks of a life even when the story they want to tell at first looks as riddled with holes as the universe (I'm told) is with dark matter. The filling-in process is why, as Schiff so beautifully says in her article, "After eavesdropping for years on another century....you begin to suspect that you've left bits of yourself all over the page. Just as autobiography has been said to be a perfect vehicle for telling the truth about other people, so biography contains some small sketch of its author."

(Back to top)
4 Comments

You're making me blush. And I should have paid tribute to Rorschach, who may have played more of a role my life than I realized before going to Wiki.

Years ago, when I was still working in publishing, an elderly family friend, now deceased, who fancied himself a psychologist (he wasn't) visited me in New York. He announced after lunch that he wanted to give me a Rorschach test, and trotted out a bunch of inkblots. The only one I remember was No. 2. ("Induces a variety of sexual reactions.") He asked me what I saw in it, and I said I saw "Two samurai warriors fighting each other" (read into that whatever sexual reaction you will). He said that meant I was going to be a writer, because I made a story out of the inkblot. Uh, yeah, I said; sure.

I didn't ask what kind. We never got to No. 9, the one about not liking unstructured data.

Yes! Thanks, Dona, for this eloquent (and fun) post.

I feel the same hunger to fill in the blanks, uncover the missing bits, figure out the mysteries. I do think that hunger is also linked to loving stories. Because a good story has to be complete enough to "ring true" and when I start a biography, it is always because I feel as is the available story of that person is incomplete -- it is not yet a full story. So I will go to the rescue! What I am rescuing is not so much the person, as her story...

I agree. The story's always the thing for me as well.